Indeed both the English "to give", and "gift" share a common etymology with the German "das Gift" und "geben":

It was also used for substances given to people for medical reasons, hence propably the shift in meaning.

Today the original meaning still can be found in "die Mitgift", whereas "das Gift" exclusively is used in the meaning of poison.

Note that there also is a shift in gender, where "die Gift" (engl. gift) was female, whereas "das Gift" (engl. poison) is neuter.

From the original meaning of someting which was given, the compound noun "Giftgeber" would be from two words with the same meaning. This makes me believe that it may have been used only rarely. It is not used in contemporary German. 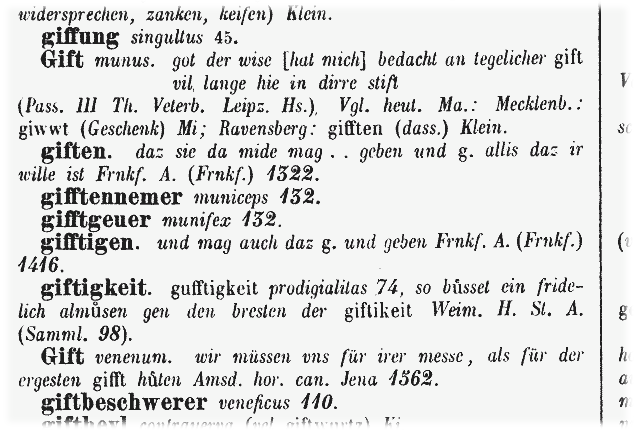 The first reference links to an entry about the book "Hoch- und nieder-deutsches Wörterbuch der mittleren und neueren Zeit", i.e. Giftgeber was probably used in the positive sense before the meaning of "Gift" shifted. You should not use this in a modern text. However it may not sound like "poison-giver" but like a surname of a potentially famous person used as a comparison.

Not the answer you're looking for? Browse other questions tagged compound archaism or ask your own question.