Ungeziefer and its meanings and connotations

Ungeziefer, noun, 'vermin', from the equivalent late Middle High German ungezibere, unziver, noun; properly 'unclean beast not suited for sacrifice'. It is based, in fact, on Old High German zëbar, 'beast of offering', which is connected with the equivalent Anglo-Saxon tîfer. The terms borrowed in Romance, Old French toivre, 'cattle', Portugese zebro, 'ox, cow', prove that zëbar was applied to large animals, and that the word was widely used in Old Teutonic. 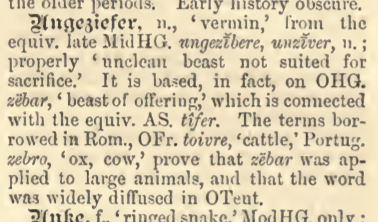 Wiktionary and Wikipedia also lists the word Geziefer with about same meaning as the negated word: "lästige, unerwünschte, schädliche kleine Tiere, vor allem Insekten". This word however, I didn't find in Kluge's dictionary.

I'm interested in the religious connotation because, Franz Kafka, a jew, has the protagonist in the novella The Metamorphosis, transformed into a "ungeheuren Ungeziefer". Could this, mostly understood as a beetle or a vermin, also be understood as ritually unclean (although I think unrein is the word used in the Torah)?

Nowadays there is zero religious connotation with that word, simple as that. It's clearly understood as vermin, no more and no less.

In the Third Reich, calling Jews "Ungeziefer" was part of the dehumanizing propaganda war against them. Theoretically, that could make for a strenuous religious association, but even then, the intention was clearly to portrait them as vermin.

Not the answer you're looking for? Browse other questions tagged meaning connotation or ask your own question.