Low German, Upper German, Bavarian ... Where are these dialects spoken?

There are many questions here on German.stackexchange dealing with variations of Standard German and with specific properties of dialects, but to many people it seems to be unclear in which geographic region which dialects are spoken.

So, here is my question:

What are the names of German dialects and in which regions are they spoken?

An isogloss is a geographic boundary between two linguistic features. One famous example of such an isogloss in Germany is the Speyer line. The German word »Apfel« (English: apple) is pronounced [ˈap͡fl̩] (like »apfl«) in Standard German and in dialects spoken south of this line, but in the dialects spoken north of this line people pronounce it as [ˈapl̩] (like »appl«), and so this line is also called the »Appel-Apfel-Linie«

More important is another isogloss, the so called Benrath line that roughly goes from Aachen in the west to Frankfurt/Oder in the east. The exact course is described in the German Wikipedia article about the Benrather Linie.

In fact it’s not a single line, but a bunch of many closely located lines separating different linguistic features. One of them is the »maken-machen-Linie«: The German word »machen« (Engl: to make) is pronounced [ˈmaxn̩] in Standard German and in Dialects south of this line, but north of this line people say [ˈmakn̩]. And geographic almost (but not perfect) identic are other isoglosses: The »ik-ich-Linie«, the »dat-das-Linie«, the »Dorp-Dorf-Linie«, the »hebben-haben-Linie« and many others. These isoglosses are geographic so similar, and there are so many of them, that they were given a common name, and this is Benrath line. It is a rather sharp line, and all isoglosses that belong to it are only a few kilometers apart from each other.

Dialects spoken north of the Benrath line are called Niederdeutsch or Plattdeutsch. In English you also have two names for it: Low German and Low Saxon. The name comes from the low and flat land where it is spoken.

There are Wikipedia articles available for it

I should also mention, that Low German is also spoken in the eastern regions of the Netherlands and that there are isoglosses running through the Low German region that separate it in smaller regions where different variations of Low German are spoken. And I should mention, that Niederdeutsch, Plattdeutsch and Niedersächsisch are not 100% identic to each other. There exist three different definitions for these three variations, but I’m not going to spread that out here. If your’re interested in this topic, you can read the Wikipedia articles.

When you move southwards through Germany, the sea level increases more and more, until you reach the alps in the south. And because the land south of the Benrath line is higher, the language spoken south of this line is called »Hochdeutsch«. But be very careful with this term, since it has two different meanings:

There are Wikipedia articles available for it

Note, that the English article talks about High German languages while the German article describes them as dialects. This is because linguists have divergent opinions of what the difference between a language and a dialect might be.

But this questions topic is about the geographic properties of German dialects, so I keep with the term »dialect« and have a closer look at geographic properties, and here the Speyer line from paragraph 1 comes in handy, because it separates the High German region in two parts: »Mitteldeutsch« and »Oberdeutsch«.

Central German is the name for the group of dialects spoken between the Benrath line and the Speyer line. They are also spoken outside of Germany, in Luxemburg and parts of Belgium. And for this reason, German (Standard German to be clear) is also an official language in these two countries.

Also Central German can be subdivided by several isoglosses into smaller regions where sub-dialects of Central German are spoken, which differ strongly when you move from east (Dresden) to west (Köln = Cologne). For more details, please consult Wikipedia.

The dialects south of Speyer line are called »Upper German«. You can find it in Wikipedia:

You clearly can differentiate it from Central German and even more from Low German, but Upper German is so diverse and spread over such a big area, that it is divided in four languages or dialect groups, where one of them has become extinct 1000 years ago:

Lombardic was spoken by the Lombards in northern regions of Italy, but it was spoken only between about 600 AD and 1000 AD. But the other three still living languages are worth a closer look:

East Franconian is spoken for example in Nürnberg and Würzburg, South Franconian in Karlsruhe.

East Franconian has some properties in common with Central German, but still most linguists put it in the group of Upper German dialects. South Franconian more clearly belongs to Upper German.

This group of dialects is spoken in many countries like France (in Alsace and the Canton of Phalsbourg), Liechtenstein (in the whole country) and Austria (in the state Vorarlberg), but the main regions are

There are Wikipedia articles about Alemannic German available

The status of Alemannic German in Germany is relatively clearly that of a group of dialects that are used in unofficial settings, like among friends or inside a family. But in Switzerland is has the status of a distinct language used parallel to the Standard German language.

Swiss German was used for writing among many centuries only in very rare cases and so it is not standardized (there are no official rules for orthography). But since Swiss people use SMS and boards on the internet, they about 20 years ago began to write no longer in Standard German but in Swiss German. And for this reason, Swiss German has of all languages and dialects discussed here the highest chances to survive also for the next 100 years, while all other versions of German slowly will become extinct in this century (as I believe) and will be replaced by Standard German.

This is the kind of German spoken in large areas of Bavaria (Altbayern), small parts in the west of Saxony, almost all of Austria (all states but Vorarlberg) and South Tyrol which is a region in the north of Italy (next to North Tyrol and East Tyrol which both belong to Austria).

Also Bavarian differs strongly from Standard German, so that it is unintelligible for many German native speakers living in northern regions. And so many linguists classify it not as a group of dialects, but as a distinct language.

And since it has so many speakers and is spread over a large geographic area, it also can be subdivided by isoglosses into regions with subvariations:

I mentioned Standard German many times in my answer, so I think I should tell something about it too:

Standard German is what you learn when you learn German as a foreign language, but you should know, that it in some manner is an artificial language, because, as you will know, when you have read this answer so far, German is not one language. Over probably more than 15 centuries many different West-Germanic languages like Bavarian, Saxonian, Franconian, Alemannic, Lombardic etc. were spoken in the region where now is spoken the German language. And the modern German language developed from this mixture of different languages, and many attempts have been made to create a language that everybody could understand who lived in this region.

Among many attempts maybe Martin Luther’s translation of the Holy Bible into German was one of the biggest steps to create something like a standardized German.

This process has not come to an end yet. It is still going on, and it will only end in one German, when every German native speaker no longer speaks their local or regional dialect, but only standard German. This is the day when all languages discussed here will have become extinct.

There is literally an english-language Wikipedia page including a nice map that answers this question: 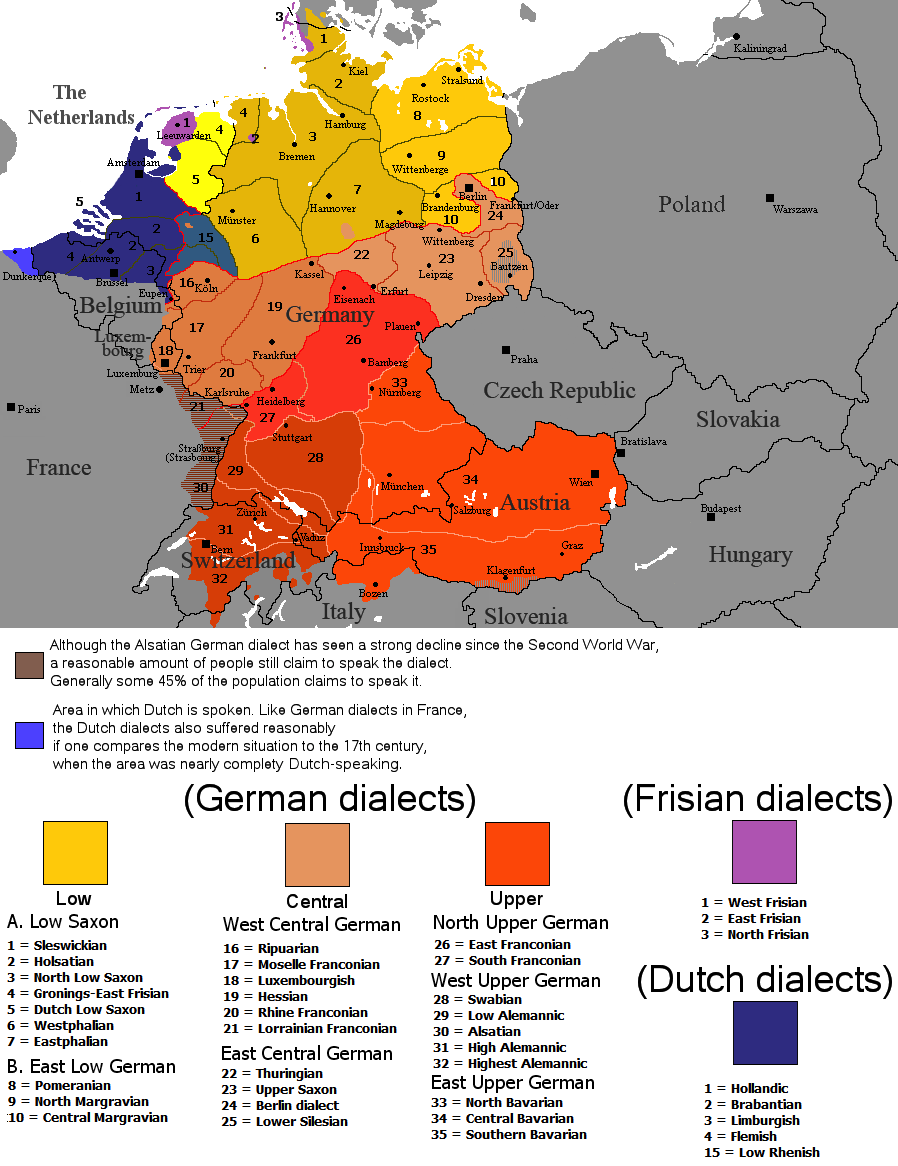 Not the answer you're looking for? Browse other questions tagged dialects regional or ask your own question.

5
Why is "Zeile" but not "Zeiger" differently pronounced in the south?
5
“Standardised Orthography” for Dialects
15
Do Germans understand Pennsylvania Dutch (Amish German)?
3
Should a non native try to adapt his German when traveling to Austria?
8
Are there places in Germany where Standard German completely replaced local dialects?
4
What TV shows are available in Austrian dialects?
6
What are some words only used in Hessen?