Why are “vier” and the beginning of “vierzehn” not pronounced the same?

Why is vier in the beginning of vierzehn [ˈfɪrʦeːn] not pronounced the same as the standalone vier [fiːɐ]?

Try to slowly pronounce the word 'vier' with a long 'i' and after that, pronounce it with a short 'i'. You will notice that the long 'i' sound takes considerably more effort to produce. For a clear, long 'i' sound, you have to open your mouth quite a bit, while for the short 'i' sound, it can stay shut. As Hackworth stated, it rolls easier off the tongue.

The interesting thing with 'vierzehn' is that its pronunciation quirk (the short 'i') is actually made official - dictionaries list it as the only correct pronunciation.

The word 'siebzehn' (17) is another interesting example. Myself and everyone I know pronounce it with a short 'i' sound as well, just like 'vierzehn'. But in contrast to 'vierzehn', dictionaries list 'siebzehn' as pronounced with a long 'i'. You see, there are quite some inconsistencies.

I can not read this pronunciation language, but they are pronounced exatcly the same. If you are speaking very fast and not very clear vier might be a little clearer than vierzehn.

I want to add, as a complement to Martin H.'s answer, where the pronunciation of 15 is evoked, the following map from the Atlas zur deutschen Alltagssprache 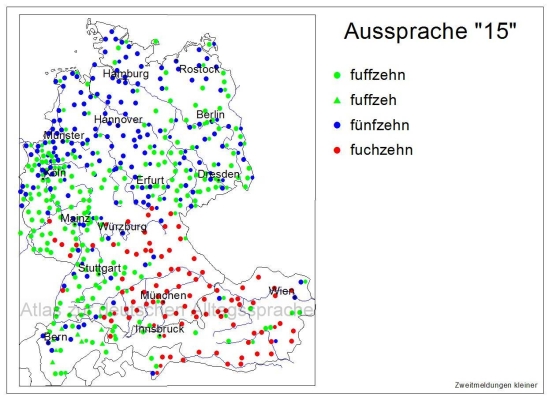 It actually depends on where you are and who you are speaking to. I pronounce vierzehn with a long i and vier with an audible r sound (not the vocalic r which sounds somewhat like a or the a-shwa). Therefore, my pronunciations of vier and the vier in vierzehn are pretty much identical.*

In other areas of Germany I have also heard the two occurances of vier being pronounced identically but differently from how I do it (using the vocalic r). I’ll listen up and ask around among my colleagues but I can’t really recall someone having different pronunciations of the two …

* Caveat: This is true if I don’t say viere instead of vier.

You can pronounce the beginning the same like four if you have not been understood the first time. Then you'd just say vier - zehn. But if you pronounce it in one word firzehn. The whole word sounds more balanced to me. Also I have a hard time pronouncing zehn after saying vier like if vier was standalone. There is just not enough air left. So I have to shorten the vier to get the ten out with enough pressure. Which alters the pronunciation of the syllable vier.

This would be a case of time-travel. The future is influencing the present in a way. ;)

Not the answer you're looking for? Browse other questions tagged pronunciation or ask your own question.

52
How is the ending -ig pronounced, and where?
6
Does German phonetics fully determine the spelling?