I need to translate the following text:

How can I translate it?

As far as i know, german has no term for "tens of [something]". Fairly commonly you will hear "Dutzende", meaning several dozen. While not an exact translation, it transports the same meaning: the exact numbers still match both. Colloquially (which doesn't fit your purpose), you often hear "zig" which is derived from "zwanzig, [dreissig], vierzig, fünfzig), so, the most common ending of the spoken tens. Hundrets are "hunderte", thousands are "tausende", tens of thousands are "zehntausende".

As a side note I would like to add that for me as a native german technophile, those numbers ("tens of Gbps") feel strangely vague. I would normally expect more precise numbers, something along the lines of "20 - 60 Gbps" or such.

I found the complete table in 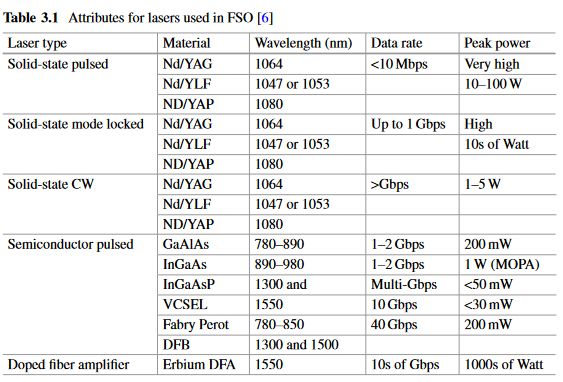 See here. One can see that the columns contain very heterogeneous entries; most of them describe a certain range. Moreover, the units are varying (Mbps / Gbps, W / mW). So what does the formulation "10s of ..." mean? Here one can read

This indicates that we should not try to find a literal translation of "10s" and "1000s" to German. My suggestion:

In a comment by Emil it is suggested to replace "im tausender Watt-Bereich" by "im dreistelligen Watt-Bereich" or "im Kilowatt-Bereich". I agree to him, that sounds better.

German does use the literal translation of "tens of something" with "zig etwas" (as in "zwanzig" or "fünfzig") - but only in colloquial language. You wouldn't use that in a serious document.

There's also an expression for hundreds and thousands: "Hunderte" and "Tausende" - but this also wouldn't be used in a serious technical document.

You would probably use something like "mehrere 10 Gbps" or even "n x 10 Gbps" (which can be misleading) or "im 10-Gbps-Bereich" or very probably, just an upper and lower limit.

These are standardized as SI prefixes, as well as appropriate in the technological context but the last two are very uncommon (at least for me). I don't know if combining prefixes gives a legitimate SI prefix. "kW" however is very common.

I also thought of "100-fache Watt" but this is maybe not unambiguous.

We have this directly:

The same scheme can be used for many other numbers, for example:

Again, interestingly, there is no variant for 10s.

As a side note, even though we're metric, it is perfectly acceptable to use "tausende von Watt" anstelle von "einige Kilowatt" in terms of the general language. The same as we talk about "1000 km" instead of "1 Mm", people understand this very well, even though there may be conventions in some engineering circles to do otherwise.

Not the answer you're looking for? Browse other questions tagged english-to-german grammatical-number numbers or ask your own question.

4
Legal firstname, legal lastname in german?
2
"Sequential", "procedural" and "planner" in German: difference between words and their translations
6
How to translate “mountain studies” or “island studies”?
4
"Anything" in German
7
German equivalent of “a few tens”
0
“Was kostet ...?” vs. “Was kosten ...?”
3
How to express "suspended flowers" in German?
1
German equivalent of "under review" and "minor/major revisions"
2
Technisches Deutsch: translation for "current-gain bandwidth product"