Meaning of "in Wahrheit"

I am currently browsing some German subreddits on Reddit, and I came across this meme on r/ich_iel. I unfortunately don't know enough German to fully understand it, so I got a bit of help from Google Translator. This meme template is just the English version translated into German, so phrases like "wie ein Geschäfts-führer" are just those translated literally into German. (Google Translator translated it as "like a managing-director", so a close equivalent to "like a boss"). What I was wondering about was the "in Wahrheit" part. Google Translate translates the entire sentence like this: "Actually goes on a date with a GUY like a manager", so "in Wahrheit" is translated like "Actually" (translated alone it translates it as "in truth", so probably not the right translation).

My question is, is "in Wahrheit" a phrase that means "Actually" in English? Thanks for the help! 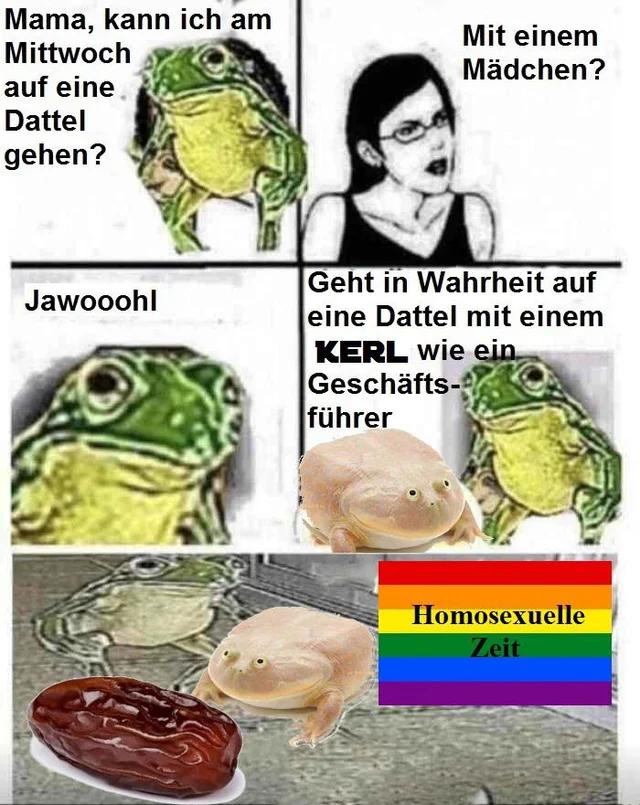 The "aisle of thought" is correct, but not entirely accurate. I hope you can see from my marks that 'in Wahrheit' is "translated to" 'in truth' or 'in reality', but 'geht' is not part of the restriction, but part of 'go on a date'.

Edit: As @PaulFrost has noted (I naively assumed OP is aware of this because of "just those translated literally into German."):

Note that in the subreddit "iel ("im echten leben" in reference to "irl = in real life") (and also in many other german-language meme contexts), frequently used "internet terms" are translated directly. Consequently, instead of the familiar "like a boss", "wie ein Geschäftsführer" is used here (you have already noticed the similarity). The same is done with the word date and the homonymity of the word is used (Dattel = date, Verabredung = date). The comments in the iel-reddit follow these same principles.

I did the same in my answer and translated the German term "Redewendung" with "aisle of thought".

Humour is a matter of debate.

In Wahrheit means in reality.

Though here: Geht in Wahrheit auf eine Dattel means something like this: In reality, he is going on a date.

I'm not a native speaker, but I can recommend the following two resources, both of which appear to answer your question:

Not the answer you're looking for? Browse other questions tagged german-to-english phrase slang or ask your own question.