Du wirst eliminiert > You will eliminate? Is this a mistake? [closed]

As far as I know, subject + werden + participle is the template for passive voice.

So, I put "Du wirst eliminiert" in Google Translate and it suggests "You will eliminate". 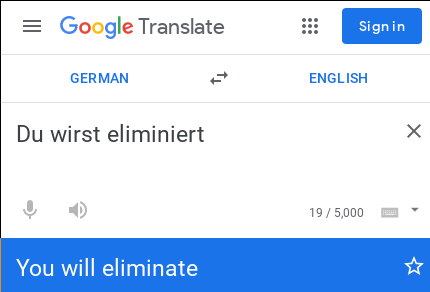 If I click the translation, an alternative "You are eliminated" is to be found — what I expected as the correct translation.

Is "You will eliminate" ever correct in any context?

I would say "You will be eliminated" or "You are being eliminated". Here is definitely passive voice. German doesn't have a continuous tense and the presence tense is often used to describe the near future.

I don't know the context, but I wouldn't use the word "eliminieren" at all, except maybe describing the Terminator film.

Not the answer you're looking for? Browse other questions tagged translation german-to-english passive or ask your own question.

1
Looking for comprehensive English-German dictionar(y/ies) in a database format
8
Does this 18th-century German quotation include a source?
5
The brain-bending "widersetzen"
4
I've messed up the heads of many people with my German, but how can I express this?
3
German Machine Translation Error in the Order of Actions (Verbs?)
2
General Rule for Translation of German Participle Constructions
0
How is this phrase translated?
2
Berührung ist *nicht gleich* Berührung
2
Can the statal passive be used in the form "ist… zur Verfügung gesteht"?
0
Genitive possesive of "every person"