The Wikipedia page for the number 1,728 (twelve cubed, or twelve times a gross) says it is called "one great gross (or grand gross, or, in Germanic, Mass[citation needed])". I want to find a source to cite for the use of "Mass" in this context, or enough evidence against its use in this context to remove this claim, but I haven't had luck in my search. Does anyone know where this claim comes from?

As many helpful comments have pointed out, the claims about "Maß/Mass" in the relevant Wikipedia pages (en:1728, de:Gros and de:Alte Maße und Gewichte (deutschsprachiger Raum)) are unsourced. No evidence is provided that "in German" ("Germanic"?), a "Maß" denotes the number 1728 (12^3) or a factor of 1728. (As for Gros, the meaning "twelve dozen" is attested since around 1700.)

On the other hand, such usage of "great gross" in English is attested, see f.i. Gyllenbok's state-of-the-art Encyclopedia of Historical Metrology, 3 vols., 2018: vol. 1, sect. "A–Z of Scientific and Informal Measures" defines "great gross: In Britain, an obsolete unit of quantity = a dozen gross, or 1728."

The encyclopedia, however, does not report about a comparably general and broad usage of "Maß" for 1728 (of something). And the extensive lists, tables and information in vol. 2, in the chapters about historical measures in [the former states and territories of present-day] "Austria" and "Germany", do not attest such usage of "Maß" either. All the text searches for "Ma[a]s", "Ma[a]ß", "Ma[a]ss" turned out nothing.

In Gyllenbok's tables there are, of course, a lot of units (often of capacity) named "Maß" and a lot of units (usually capacity) amounting to 1728 of some other unit, but there is no overlap, let alone a widespread correlation, between Maß and 1728.

At least in theory, there is a logical space for a possible correlation of Maß and 12^3. "Maß", beyond its more general meaning of "the definite measure of something", was often used to mean the definite volume or capacity of a container, i.e., its cubic measure, since volumes are in cubic proportion to lengths. For instance, Johann Friedrich Krüger, Vollständiges Handbuch der Münzen, Maße und Gewichte aller Länder der Erde, Quedlinburg/Leipzig 1830, defines Maß (Maaß) as follows:

"In the most specific sense [Im beschränktesten Sinn] means the determinate cubical measure of the content of a vessel for dry or liquid goods, such as a Maß of grain or wine [wie Getreidemaß, Weinmaß]" (p. 180)

So, in any system of measurements in which an important unit of length A is 12 of some other unit B (compare the historical German Zoll = 12 Linie), it is possible, and would seem quite natural, to have a derived unit of volume A^3 which equals 1728 times B^3. [EDIT (thanks to @tofro for the comments):] Real-life systems of measurements, however, especially pre-Enlightenment and before the standardization of the Industrial Age, did not always follow formulas of abstract mathematics. Choices are dictated in large part by practicality (is this unit the right order of magnitude to be actually useful?), by material factors (what containers are available in my region?), their force in turn compounded by the history and tradition (artisanal, technical and commercial know-how). For the best part of German history, every state, city, and autonomous entity had its own system; despite this variety and the frequency of units like "Maß", I couldn't find any evidence for the local usage of this unit to denote a volume of 1728 times x, nor for it denoting the number or factor 1728; let alone a general and broad usage. (Following @tofro, this lack of evidence should not come as a surprise.)

Maß is indeed an old measure of capacity - See this quote from the Bible (1. Mose 18.6)

(there are more references to Maß in the Bible, and they all seem to be referencing to measures of grain. )

Obviously, there's no hint what this would be in modern measures. And I couldn't find a connection to the duadecimal system, as implied by the quote you give (given that we seem to be dealing with capacities, that wouldn't make a lot of sense anyways).

Grimm's Wörterbuch has a reference to Maß as a measure of capacity as well:

As can be seen in the Grimm quote, Maß used to be a measure mainly of capacity for grain, hay and water, but with widely varying absolute sizes.

"modern" references to Maß can, of course, be found on the Munich Oktoberfest, where a "Maß" would be understood as a Liter of beer.

I doubt that the word "Maß" denotes (or denoted) 1728 although there are quite a number of sources making claims about it. Here are examples.

If it should be true that "1 Maß = 1728", then it must be an old measuring unit which fell into oblivion. In that case I would expect that it is mentioned in Johann Friedrich Krüger, Vollständiges Handbuch der Münzen, Maße und Gewichte aller Länder der Erde, Quedlinburg/Leipzig 1830 (see marquinho's answer) - but it is not. This suggest that "Maß" is erroneously assigned to 1728. What could be the origin of this mistake?

Here is my hypothesis. Look at this website. It contains information about old measuring units. The relevant part is 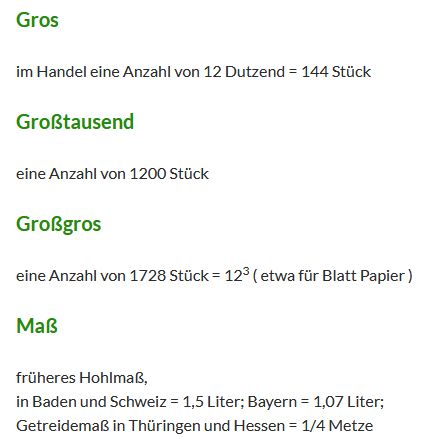 But if you do not realize that the explanations are always below the names of the units, you may be misled to think that they are above the names and read it as

I am aware that this is pure speculation, but to me it is plausible. Also I do not claim that the misunderstanding reaches back to the very website linked above; there are probably other websites or books presenting the same list. Anyway, once the mistake had emerged somewhere, it certainly diffused by copy and paste (look at the above examples 1. and 3. - we find exactly the same formulation on two different websites).

on p. 287 Johann Friedrich Krüger's book. It also brings together the number 1728 and the word Maß (".. 1728 Kubikfuß Duodecimalmaß, oder auch nach letzterem Maß ..."). This could againbe a source of misunderstanding, but it is not as convincing as the above explanation.

Firstly, that Maß (feminine or neuter) was used to measure volumes of liquids or grain is not in doubt (Meyers Konversationslexikon: Maß). However, the question clearly regards what in German is call Zählmaß or Stückmaß, i.e. a unit used to specify a number of items of a given countable good, such as Dutzend "dozen".

The source of both Dutzend and dozen is French douzaine (etymonline: dozen). Similarly, French grosse [douzaine] "large dozen" (144 items) was the source for both English gross and German Gros (etymonline: gross, DWDS: Gros).

There is absolutely no reason to believe that Maß was used for indicating 1728 items when großes Gros existed and the relevant reference works have the latter but do not mention the former at all.

Not the answer you're looking for? Browse other questions tagged reference-request numbers or ask your own question.