How can a native English speaker know when it is appropriate to use the polite (Sie) or the familiar (Du)?

In a language such as English, where there are no "built-in" (so to say) polite and familiar forms, what are some simple tips or guidelines for when to use the polite or the familiar forms? Are there significant differences in written text, such as letters and e-mails, and conversation?

In person-to-person contact the polite "Sie" is the standard way of addressing someone (in written contact even more so). Unless they are the same age as you (or younger) and you are pretty young yourself (say, under 30) - when this is the case and the setting is relaxed (at a party, in a bar, etc) you could venture to use "du" right away.

Switching to the informal "du" from an official/business setting usually requires that you know and like each other well, at some point one will offer the "du" - traditionally, the older one to the younger one. Receiving the "du" from somebody carries some weight and should not be taken too lightly. Also, if in a meeting, the "du" is usually taboo unless every participant is on a "du" basis with everybody else.

Children are addressed with "du" by default. At some point, when they come of age, there is a fuzzy zone where even young people are uncomfortable with being addressed with the now-correct "Sie", as it implies just that - they are getting old.

Exceptions from the rule are the Internet (where the informal "du" is the default form and being addressed with "Sie" is awkward, even mildly insulting when done right), and, of course a big Swedish furniture company, where the "du" is company policy.

This is not actually a grammar question. The usage of the Du vs Sie is mostly a question of social context and social standing and can differ a lot between situations. There are no strict rules connected with the choice of Du vs Sie. Following a few general guidelines:

Unless you know someone well or are addressing a child it is safest to use the polite form. This way you don't risk causing offence.

You can take cues from others too, if they address you in the informal form it is probably safe for you to do so in return.

There is a simple diagram (via this blog): 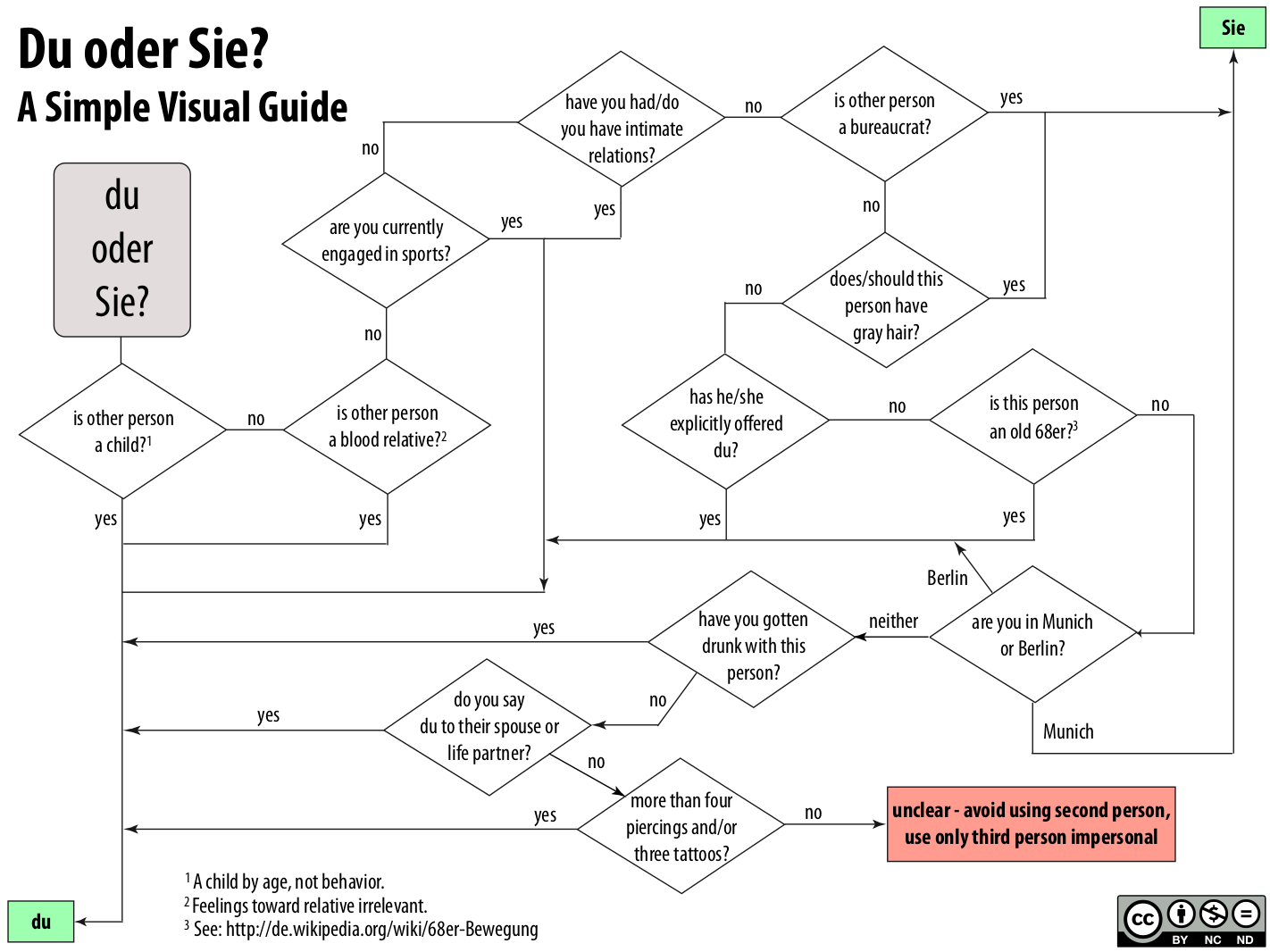 which actually is somewhat accurate despite the fact that it probably was written tongue in cheek.

(The first name signature indicates a willingness to switch to a more informal address and a shyness to actually ask.)

Or, in an email to the other participants of your new choir:

Note that traditionally there have been strict etiquette rules on who can offer the informal address to whom (e.g. always the older one to the younger or always the woman to the man), but 19th century etiquette is rarely enforced these days. But it is still a matter of power and respect and you should not take the initiative if you are in a clearly subordinate position.

As a rule of thumb in every day life, you can decide the correct form on how you would call a person in English:

In addition to what has been said there are situations where the informal Du still is generally inappropriate, e.g.:

In situations where you are not sure if using the Sie-form may be too formal but feel uncomfortable to use a straight Du you may use a not so complicated avoidance maneuver that is widely used: that is using the third person. This is also the German way to find out:

Most likely you may want to use 1), but using 3) would not offend anybody. Eventually you will be addressed with Du in return. Then you may comfortably switch to using 2).

For conversation (it's almost the same for letters and Emails):

Using "Sie" is appropriate if you have a formal relationship to the other person, if the other person is older, in a higher position (e.g. your boss). It means you respect the other person. If a person tells you only the last name you should use "Sie". (I am a native german speaker and it's much harder for me to insult a person I address formally)

Using "Du" is appropriate if the other person is much younger (you would never say "Sie" to a child), if you are friends, or if you are related. You would also use "du" if you want a personal relationship, so if you are speaking with other students or girls (in your privat time, not in office) you are interested in, you should never use "sie". If a person only tells you the first name, it is the same as offering "du". (Formerly children were used to adress their parents formally, but that's a long time ago.)

"Knigge" is a book which answers many questions to good behaviour with other people. According to them, the person who is higher in hierarchy offers the "du" (source). If you already used "du" and the professor didn't tell you to use "Sie", you should continue to use "du". If a person askes you to use "Sie" or "du", you should definitely do so.

Some of my personal experiences: When I was in school in Bavaria, every teacher used "du" and every pupil "sie". Some of my former teachers offered the "du" after I got my final exam, but it were always the younger teachers. Every teacher asked us if it is still okay if they continue using "du" after we attained full age.

While I was doing community service (every German has to do either community service or military service) I used "sie" for all of my co-workers, as I was 20 and all of them were at least 30 and they had much more experience in the work than I had. All of them offered me to use "du" on my first day, except the boss. She was very young, but her position was higher. I guess she didn't offer me "du" as she had to tell me if I did something wrong and it's easier to do this on a formal basis.

A friend of mine who has a very good feeling for beeing politely uses "Sie" when she speaks with other students she works with. I was quite surprised as I would never use "Sie" if I spoke to other students in roughly the same age.

In the Internet (forum, Wikipedia, Social networks): As you don't know the real name of the person you will always use "du".

Basically, it depends completely on your conversational partner. But others already gave good answers to that.

I would just want to amend one option: In case of doubt, simply avoid it. Examples:

You can actually stretch this very far. It's a nice trick not to create the distance "Sie" induces, but also not to unappropriatly use "Du".

In my opinion the negotiation process is still missing from the answers so far.

If both persons are adults, usually the older or socially higher ranking person gets to call the shots, for example

If one of the two is a child, it is mostly asymmetrical. Though sometimes children are allowed to say Du to adults that are not family:

I am reporting my personal guidelines, which may repeat something already answered.

I’m English, been with a German for 3 years, been to Germany about 8 times, I’ve met my boyfriend’s family and friends etc. The people I/we tend to hang out with in Germany are in their 20s and 30s. I’ve read Keeping up with the Germans, Planet Germany, Springtime for Germany, A Year in the Scheisse and various others and, after all that, these are the guidelines I've personally come up with:

A Point that I missed in the previous answers is that you can use "siezen" to mark a line. For instance you are dealing with somebody which you don't want to be friendly with. In business it is used to separate yourself from a supplier for instance even though you work in the same project.

add-on: Take care if you're joining certain types of guilds. Too much respect and politeness would be a good joke if you used "Sie", for example:

As soon as you address somebody by his or her first name, then you would use du:

On the other hand when you call a person by the surname, you would use Sie:

note: always use a capital lettre with Sie.

Edit: What I wrote above is the usual case, meant as a direct answer to the question, there are some exceptions to this rule however.

Not the answer you're looking for? Browse other questions tagged politeness culture or ask your own question.

3
What is the difference between Du and Sie
19
What are informal ways to say "good bye"?
17
The exact German word for addressing a woman with higher academic/social status (The applicability of the term 'Frau')
30
How to refer to a woman based on her age?
18
Can I switch to the du-form myself when I am addressed as "du"?
9
How would one say 'I solved the Dirac equation.', and 'You solved the Dirac equation?'?
11
Do we use "Du" or "Sie" to address users in a German operation manual?
17
How to address more than one person in an E-mail?
6
If my professor says "du", can I use "du", too?
16
If I'm on 'du' terms with the wife (my colleague), am I automatically on 'du' terms with the Husband too?
See more linked questions

9
Can the polite form ‘wie geht es Ihnen’ be shortened to ‘wie geht’s’?
22
Would a computer use ‘du’ or ‘Sie’ for the user?
18
Can I switch to the du-form myself when I am addressed as "du"?
4
Deviations from the traditional form of correspondence
3
Should a non native try to adapt his German when traveling to Austria?
15
Are there any words in German that are never to be used in polite conversation?
2
Nod and Shake Head
9
Why do translations of German books read so differently from other books?