How should an Umlaut be written?

This sounds like a silly question, but our teacher said it should be 2) in the image below: 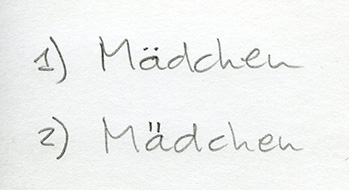 She said 1) is wrong! I almost fell off my chair. I've never seen it printed with the strokes. Not in novels, nor papers or magazines, nor textbooks, never. She tried to convince me (unsuccessfully) that this was because computer and typewriter fonts have dots for an umlaut instead of the strokes. IMO that's no explanation at all: if they really want strokes there is nothing that stops them from designing such a font, right? So now I'm confused, which should it be: dots or strokes?

We are probably talking about then handwriting as it is taught to children in school.

When I was at school we were taught the "Lateinische Ausgangsschrift" where we had to make strokes on the letters as shown below:

This was mainly done from historic reasons. The school handwritings derived from Sütterlin, and the "Deutsche Normschrift" of the Fourties. Both had strokes too. In addition they may have been considered to be better visible than dots when written with an ink pen, a pencil, or a stylus on a board.

Starting from the Seventies pupils had to learn another handwriting, the "Vereinfachte Ausgangsschrift" where the strokes were replaced by dots:

None of these variants are right or wrong, because we do not have any rules on our individual handwriting. But whenever you see people writing strokes rather than dots they may have been educated prior to the Seventies.

The umlaut diacritic, consisting of two dots above the vowel [...]

Here are the new and old notation of umlauted vowels:

When it comes to handwriting:

In modern handwriting, the umlaut sometimes resembles a tilde, quotation mark, dash, miniature u or other small mark.

So there are a lot of possibilities to "write" umlauts, none of them I would consider wrong.

I've never heard anyone claim that adding dots to form an umlaut is wrong.

There are however various ways to mark an umlaut. Especially in handwriting those dots form little lines or even one contiguous horizontal line, because it's hard to place dots properly when your arm is in movement.

You definitly won't raise any eyebrows when using dashes instead of dots, but dots are the "official" thing.

I just remembered that in the 1000 year old handwriting Sütterlin the umlauts are formed wih a little n-like notation and assume that those notations maybe transformed to vertical lines over time.

But still, dots are never wrong.

Not the answer you're looking for? Browse other questions tagged umlaut handwriting diacritic or ask your own question.

11
How to alphabetically sort a list of names?
13
How to type umlaut over a dash as in many German dictionaries?
11
Warum hat »nächtlich« einen Umlaut und »weihnachtlich« keinen?
17
Can an umlaut be written as a line in handwriting?
3
How are vowel sounds changed by the diaeresis/trema?
5
Umlaut over consonant preceding a vowel
2
Umlaut or not on "ihr" form of verb
7
Wann macht die Endung -in keinen Umlaut?
0
Morphological Processes involving loss of umlaut