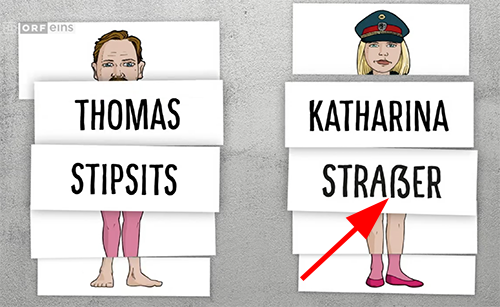 0
Was ist der Zweck des großen Eszetts?
33
Is there a rule that dictates whether to use the eszett (scharfes S) or double s?
21
What is the appropriate capitalization of 'ß'?
16
Is it an error when I do not use ß when it is necessary?
0
How to type the ß and capital ß (ẞ) on a Windows 8 German keyboard?

33
Is there a rule that dictates whether to use the eszett (scharfes S) or double s?
14
What caused "ss" to gain popularity over "ß" in the 19th century?
27
Why are the German guillemets inverted?
7
What typographical rules are applied when creating the “Eszett” in a new font?
11
Is the eszett (ß) used in last names?
2
What is the punctuation rule in this German sentence?
15
How is the English Miss written in German?
10
What does the following character mean in German: »Ø«?
7
Capitalization in 18th Century German - »GOttes« and »GOTTES«