in Genitive Singular for Masculine and Neutral nouns, it's added “-s” or “-es”? [duplicate]

Ask Question
Asked 7 years, 2 months ago
Active 1 year, 6 months ago
Viewed 2k times
4
This question already has answers here:
Nouns with 2 genitive forms (-s/-es). When to use each? (3 answers)
Closed 7 years ago. 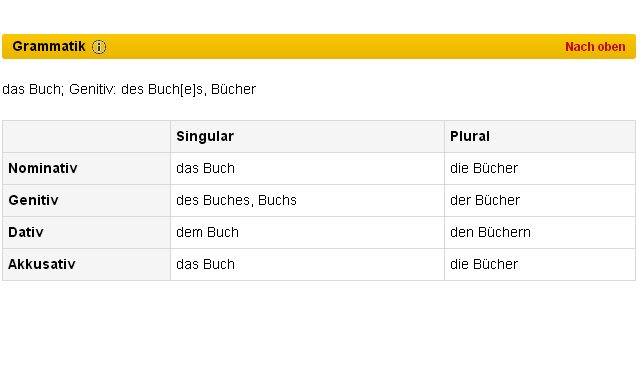 In Singular Genitiv for the neutral noun "Das Buch" they wrote in Duden "des Buches, Buchs", is there a rule to choose if we must add "-s" or "-es" to the noun, or something else?!!

The answer, as often with languages, is: It depends. The question itself however needs to be tackled in two steps:

At first you need to make sure which genitive singular suffixes are actually allowed for a given word. There are three types of nouns in the German language when it comes to this:

The inflection class of a word is also an indicator, whether only one option is allowed.

canoonet gives a more detailled overview with many more examples.

Choosing -s or -es if both are allowed

For a word where both endings are allowed -es is indeed considered more poetic as stated by accolade, but could also be interpreted as outdated. The Duden says that -es is preferred in constellations where the genetive is prefixed (e.g. des Tages Hitze) or within compounds with interfix-s (des Geschäftsfreundes).

Not the answer you're looking for? Browse other questions tagged grammar grammatical-case genitive or ask your own question.

1
Subsets of words inheriting genders from an (implicit) set
7
On the declensions of the pronoun “man”? Part I: Finding a substitute for the genitive for “man”
4
Gerund vs. infinitive
2
“Lieben es” vs “lieben”
4
Genitive of masculine plural indefinite nouns: -n ending
8
“Ein großes Bier, bitte” in plural form
5
Rules for when ~s or ~es are mandatory in the genitive?
3
Genitive Case with “s”
0
N-Deklination von Namen in Genitive Singular
1
masculine/neuter nouns in genitive singular