Difference of “da” and “weil”

Which one is more commonly used? Da or weil? And which one is dialectal?

The sentence with weil is definitely more commonly used in the spoken language. It has not much to do with dialect; I would say both versions are fine throughout Germany. One point is that when we speak, we often say it the other way around

If you want to sound really native-wrong German, then you have to ignore the rule of putting the verb at the end in the relative clause. Therefore, on the street you would probably hear

The Atlas der deutschen Alltagssprache did a survey covering that question, too.

In the example sentence

the colours in the following map represents where people would use da, weil, nachdem, wo or wenn (however, wenn would change the meaning at least as perceived by standard German speakers). 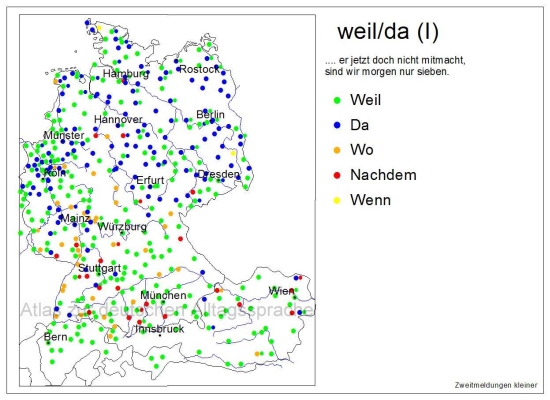 Clearly, it is more common to say da in the North, but weil dominates throughout. The second example sentence used was

Weil is still most common across the entire German dialect continuum, and da is still strong in the North. The South (not including Switzerland) often also allows the additional nachdem, although that actually signifies a temporal relationship. 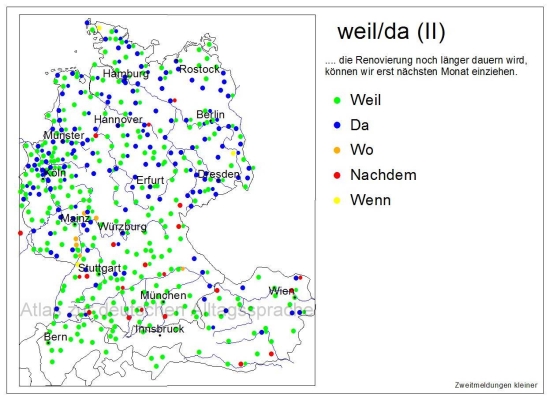 The authors state that this is simply because causal relationships originally developped from temporal ones. Even Luther originally used the odd nachdem to signify causality; however, that usage was not really transferred into modern German. The full interpretation can be read on the corresponding site of the Atlas

Not the answer you're looking for? Browse other questions tagged word-choice differences dialects or ask your own question.