Is there a free crowd-sourcing site that will correct German language sentences and paragraphs?

I write e-mails throughout the day at my job and use the following resources to correct them before it goes out:

But I would like to also have a site where I can just have my German language corrected.

Is there a free community site with a critical mass like German Language & Usage that I can go to, paste in the main text of an e-mail, wait a couple of minutes, and have native speakers look over it and correct it for me?

Additionally, it would be helpful if the people who correct the language could also identify the errors which would link to appropriate grammar exercises, and allow users to collect flashcards and vocabulary from the corrections they received, etc.

There doesn't seem to be such a site yet. There certainly isn't one with critical mass, like GL&U has, otherwise it would (almost per definition) be easy to find on google. There might conceivably be a tiny forgotten one hidden away somewhere on the internet, but if it's so small that google searches won't pick it up, it's unlikely to be of any use to you.

I also see a few issues that really make me doubt whether it's a viable idea, too:

but the time and effort you spent turning your issue into an interesting question is the very thing that makes people want to help you out.

The site you want would allow you to get a ton of free labor out of people with absolutely no effort on your part, and to be honest, I think there are good reasons no such thing exists.

Your best bet is probably to find a few native speakers who are willing to correct your email for you in exchange for you correcting their English email for them.

Lang-8 is something you might be looking for, although randomly slapping down an email will not be corrected.

I have had my submissions corrected in minutes previously. Also, you can think about helping people learning your mother tongue.

In my experience, you would need to split into parts you do not understand, and parts you do, then write your translations, and provide them to give clarity to the translator.

Learning a language is hard.

I have set up a project for exactly this: www.textrevi.com

Feel free to post your text, and there will be a correction (in German within 24 hours).

There is also an option to show the corrections, so you can easily see your mistakes: 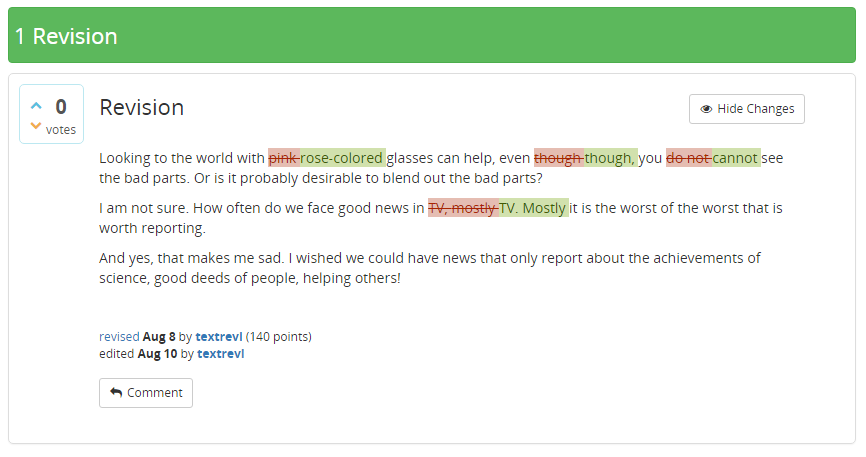 There is this site Lang-8 that I have been indicated. I have not used it yet though, but it looks promising.

It's not only for german language. But I don't think there is any time guaranty for being corrected.

edit: I saw elsewhere on SE someone talking about http://www.proz.com/ but it doesn't seem to be free.

www.busuu.com is really good but beware that you sometimes have to do other activities to get the the translation part but they are also quite helpful. There are plenty of native speakers who will reply, I have used it for German many times before.

try http://www.Busuu.com there is a free and a paid part to the site, and it's possible to post texts and other native speakers will correct it, usually pretty fast

Not the answer you're looking for? Browse other questions tagged resources or ask your own question.

56
What movies are good for learners who want to improve their grammar and vocabulary?
23
Suggestions on preparing for the Zertifikat Deutsch (internationally accepted certificate in German) exam
5
Is "zweisprachige Ausgaben" the right expression?
6
Is there a German-English dictionary in PDF (or that works offline)?
31
Resources for learning German
2
Is there a book about German that is comparable to "Wheelock’s Latin"?
7
German verb categories and classes: Is there a complete taxonomy out there?
1
Are there any German-language films for streaming on Netflix?
3
Is there a German banter site?