What is the correct way to denote a quotation in German?

However on this site I have seen people writing German quotes like »this« and „this.“

Which form is correct?

There are three legal variants:

The first version is the most used in Germany, followed by the second.
The third is the preferred in Switzerland but allowed in a German text too.

When to use what?

Use „Gänsefüßchen“ for handwritings. They are easy to write.

Use »Guillemets« for printed text or for text for the screen. They don’t break the line as hard as „Gänsefüßchen“, and all fonts use them correctly. „Gänsefüßchen“ on the other hand are broken in Tahoma and Verdana: They point in the wrong direction.

On a German PC keyboard the characters are not available. But there is useful software for Windows. ac'tivAid Forte has a module CharacterAid: 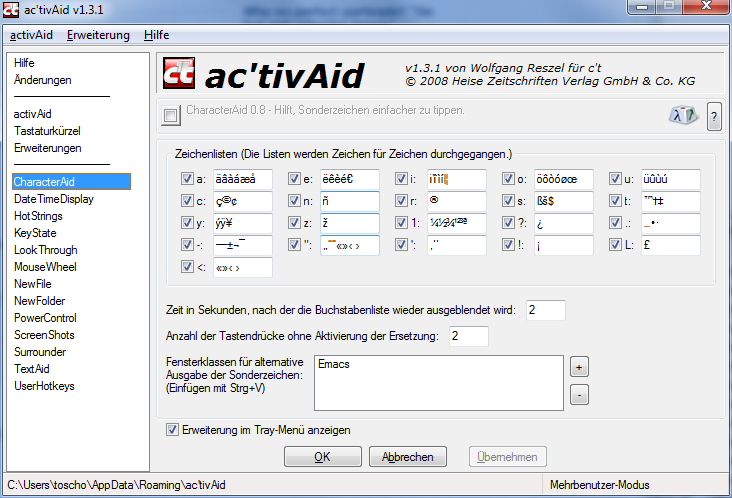 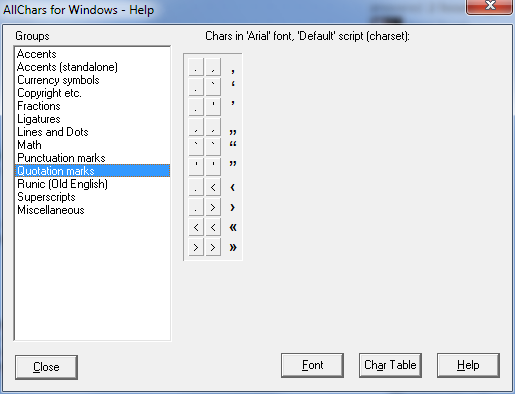 with US-International keyboard selected as input source they can be entered with ⌥ + ⇧ + W for „ and ⌥ + [ for “.
The symbol ⌥ denotes the "Option" or "Alt" key, which Apple chose to Translate als Wahltaste.

On a Mac with a native German keyboard or input source layout this would then be: ⌥ + ^ for „ and the corresponding ⌥ + 2 for “.

This article lists more options for the most common operating systems.

Don’t ever use ' and " just because they are easy to type.

It starts on page 8, page 11 contains a quick overview: 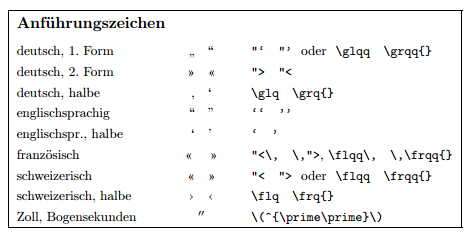 These are the two correct ways to quote in german. Note that unless in most other languages, including English, the direction of the quotes is the other way round. While English quotes (“…”) are 66-99, in German it is the other way round: 99-66 (if you look at the symbols in a serif font, you will see what the 6/9 refers to). And of course apart from the direction, the first one is placed at the bottom.

The Duden has a nice summary on the rules according to the “Deutsche Rechtschreibung”. In rule 12, they explain when to use the half quotes (‚…‘), which is when they are within another quotation (denotated by full quotes: „…“).

You may use guillements (»…« and ›…‹) as an alternative, but „this“ is the preferred way. Note that they are used as chevrons which means that they are pointing inwards. This is different from its usage in French (and German in Switzerland).

Using a typewriter, " is the correct form to denote the quotation mark in German.

Currently these characters are displayed here by the Verdana font „“.

Hopefully when this site leaves beta, it will get a default font, which renders these characters in a correct way. I have seen Home improvement leaving beta and they got a different font.

If we type „“ now, it will automatically be rendered in the correct way after we leave beta.

I found a further tool to type these characters: Type German characters.

There is a similar tool to type IPA phonetic symbols.

Both tools are web pages, i.e. no installation required.

As far as I know » this « is French quoting style and „this” is German. Not only the correct quoting symbols are important though. I remember quite specific rules for commas etc. that we learned at school, which were quite different from the English and French. This might be another question though and cannot be answered by me in detail.

The English Wikipedia (en.wikipedia.org) has an extensive, well researched and definitive article on the use of quotation marks in most countries of the world. The graphics for the quotes are set out in two main columns (Primary and Alternative usage), with each main column subdivided into the graphics for double and single quotes.

For "German" the primary usage is listed as single and double quotes. The alternative usage is the inward pointing single arrows rather than the internationally more common outward pointing arrows.

On the other hand, Swiss German is listed in the article's table as having exactly the opposite usage, but with outward pointing arrows as the primary usage, and quotes as the alternative usage, i.e., quote marks rather than inward pointing arrows is perhaps the preferred usage.

Finally, User 15677's ALT-code answer that two commenters deprecated was more than helpful to me, as I have have for many years been using ALT-codes to enter the umlauted vowels Ää Ëë Ïï Öö and Üü not found on my English language QWERTY keyboard, as well as the double-ess character "ß". Serendipitously, I happen to be engrossed in mapping the ALT-codes for my Sütterlin script fonts and User 15677's answer put me on to a character I'd been looking for, the "hyphen" character (ALT+0173). And I thank the member very much for obliquely helping me to find it!

I have always seen the "Little Goose Feet," but until today I did not know how to generate these symbols. For anyone trying to generate Gänsefüßchen (“„) with a US Macintosh keyboard, set to German input in your Keyboard Preferences, the key sequence is Shift-Option-W to open a quote („) and Option-2 to close the quote (“). I hope that helps!

Not the answer you're looking for? Browse other questions tagged punctuation quotes or ask your own question.

6
Direct speech punctuation
24
Wie schreibt man Umlaute und scharfes S auf nichtdeutschen Tastaturen?
27
Why are the German guillemets inverted?
7
What typographical rules are applied when creating the “Eszett” in a new font?
7
Benutzung von Anführungszeichen
2
What is the punctuation rule in this German sentence?

14
Double quotes in Switzerland for German texts (Guillemets/Gänsefüsschen)
27
Why are the German guillemets inverted?
2
What is the punctuation rule in this German sentence?
3
Correct way to write sequence of compound words with same ending
7
Should air quotes (or finger quotes) in German –if they exist at all– reflect the difference „ “ vs " "?
5
Why are German quotation marks set down, then up? Example: „quotation“